Every month during the year we host a Drop In Lunch for those in our community in need of company. A light lunch of soup and a choice of sandwiches is provided for a charge of £1 per item to cover costs.

In December we change the routine and lay on a three course Christmas Dinner for no charge for all those who regularly “drop in” during the rest of the year.

This year we served 24 dinners: starter – Soup or Melon, main course – Turkey with all the trimmings and to round it off Christmas Pudding or Trifle. A wonderful end to the year.

A good time was had by all. After Mass we adjourned to the Red Hall in Ramsbottom. This is our regular venue and as usual they did us proud. A party of 39, comprising our parishioners and also friends of St Hilda’s were treated to a wonderful occasion.

The traditional Christmas fare was available but also alternatives were provided, roast beef, salmon and also as is now standard, a vegetarian option. There has not been a single adverse comment – the menu, room layout, service of the meal and quality of the food could not be faulted.

We concluded the proceedings with our Grand Raffle which raised the sum of £644 for church funds.

Thanks are due to those who worked so hard to make the day such a success.

A marvelous occasion. A congregation of fifty, plus five visiting clergy, joined together in prayer and song in the celebration of a Solemn High Mass. Fr David Sutton preached an interesting sermon on the life of our Patroness, relating the story of her immense contribution to the Faith in these islands. The Mass was followed by a buffet with the opportunity to meet with friends of St Hilda’s, both old and new

This is becoming a tradition at St Hilda’s! Gary and John provided us yet again with a head-scratching yet thoroughly entertaining evening. Around 50 turned up, formed into teams and competed in a test of knowledge ranging from history and geography to film and TV themes. The inner man and woman were provided for with a choice of hotpot, lasagne or chilli.

A wonderful total of £446 was raised for church funds.

Along with many others they helped to produce a fantastic day – our second Makers’ Market, this time combined with a Christmas Fair. An early opportunity to buy presents for all the family.

There was a wonderful atmosphere; with a wide variety of items for sale along with activities for children and the chance to post those special letters to Santa (stamps not required).

We raised the wonderful sum of £1500 towards essential church funds.

Alfie at the Keyboard 27th September

What a wonderful evening! 43 of us listened to, sang along with and danced to Alfie playing all the old favourites (and some new ones).

There was however another  highlight to the proceedings – half way through everyone tucked in to a delicious meal of Fish, Chips and Peas. (supplied by White Fish of Unsworth)

When all was over we realized that from ticket sales, raffle and very generous donations we had raised the incredible sum of £508 towards Church funds.

Diets were suspended or conveniently forgotten as we headed to the Croft for our second Macmillan Coffee Morning. There was a delicious array of cakes displayed for consumption, a compliment to the baking skills in St Hilda’s community.

We raised the magnificent total of £300 for this wonderful cause.

We all assembled at 9.00 am on Monday 19th August at St Hilda’s for Mass and then were sent on our way with a blessing from Fr Croft.

Our group of 17 was made up of pilgrims from St Hilda’s Prestwich, The Ascension Salford, St Stephen’s Elton and The Holy Family Boothstown.

After a long drive we all arrived safe and sound, though rather stiff, at Walsingham in good time for supper.

We were following the traditional midweek programme during our three days at the Shrine.

On Tuesday morning we attended Mass in the Holy House and then after breakfast Father Croft led us in the Stations of the Cross around the grounds.

Later that morning we came together, again in the Holy House, for the reading of our Intercessions; asking for prayers for relatives and friends who are unwell and to pray for the repose of the souls of those who have passed away. Lists of all the names were read out.

Following the usual excellent lunch, we then set off in convoy to the RC Shrine at the Slipper Chapel – it is good to see just how well the two communities, Anglicans and Roman Catholics, are working together to promote devotion to the Virgin Mary.

In the evening the Shrine Church was full for the Services of Healing and Reconciliation and Sprinkling at the Well.

On Wednesday morning the Shrine Church was again packed for the main Pilgrim Mass.  Joe had the privilege of acting as thurifer.

In the afternoon we left matters spiritual behind and set off to Wells-next-the-Sea.  The smell of Fish and Chips, the Kiss Me Quick Hats and sticks of rock on sale reminded us that we were at a typical British seaside town.

In the evening we took part in the atmospheric Procession of Our Lady as we walked round the grounds holding lighted candles aloft and singing Mary’s praises.  The evening concluded with Benediction of the Blessed Sacrament. Phyllis and Carole had the essential role of Sides Persons, welcoming the congregation and giving out the candles and shades.

On Thursday we started the day with Mass in the All Souls’ Chapel and then after breakfast bid a sad farewell to the Shrine and set off for home.

The end of a wonderful few days; the food was good; the company was excellent and I am sure that I speak for everyone in the group in that we have come home spiritually refreshed from our time spent in England’s Nazareth.

Our Lady of Walsingham – Pray for Us.

All the preparation paid off! A wonderful day.  Early Saturday morning the Croft was a hive of activity; tables were set out, Paul Denby set up his gazebo on the lawn to cover his bottle tombola stall and the catering team started cooking bacon to make butties for the expected starving hordes. Stall holders started to arrive and soon the Croft and its adjacent grassed area were buzzing.

Customers started appearing  as soon as we were open and a steady stream continued right through the day.  For many it was their first time in St Hilda’s and some even took the opportunity for a look round our beautiful Grade 2 Listed place of worship.

Over £600 was raised for church funds, but more importantly a good time was had by all.

A highly successful first venture which will definitely be repeated.

Some pictures of the day! 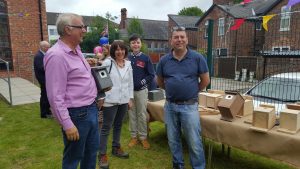 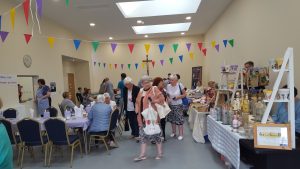 A hive of activity in the Croft 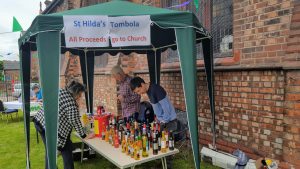 Paul and Ian on the bottle tombola

At last the weather acknowledged that we were actually in summer.  The glorious day was exactly what we needed to enjoy our annual Strawberry Tea.  A delicious spread of soup, followed by sandwiches, scones with jam and butter and rounded off with strawberries and cream!  All we needed was players in white chasing a ball backwards and forwards to bring the Wimbledon feeling to Whittaker Lane.

The food was scrumptious, the company (around 40 souls) was cheerful and we raised over £300 for church funds.

Thanks to one and all for the hard work and for coming to partake and making the efforts worthwhile..

Midsummer’s Day (almost) and we held our annual Summer Fair – despite the not so summery weather! The Croft was packed as a very successful event resulted in a contribution of £1050 towards church funds 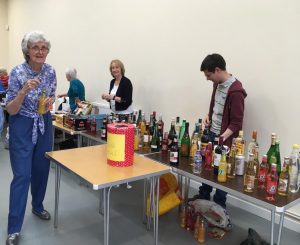 A lucky winner on the  Bottle Tombola! 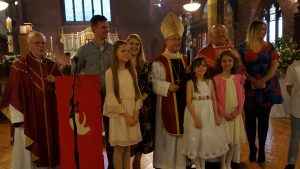 The Bishop of Beverley braved major traffic jams crossing the Pennines to come and confirm eight young people at St Hilda’s. Five candidates were from the home Parish and three from St Paul’s in Salford. Members of both communities packed the church to give their support on a wonderful occasion.

Some of the candidates are pictured with the Bishop along with the two Parish priests, Canon Wyatt and Fr Croft. 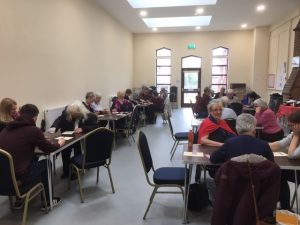 Total concentration reigned in the Croft as 29 ‘players’ competed to attach body parts to beetles, the process controlled by the roll of a dice.

It was great fun and raised a total of £220 for church funds.

Many thanks to Julie, Sheila, Ken and Paul for all their hard work and to Jess for taking charge of the Raffle.

An event that was due to take place on Shrove Tuesday but had to postponed.  Phyllis, assisted by her daughter Andrea, served up a delicious menu of soup (three varieties) followed by pancakes and rounded off with assorted desserts. The total raised, including donations, at the moment, is £130 which is to support the Church Urban Fund. 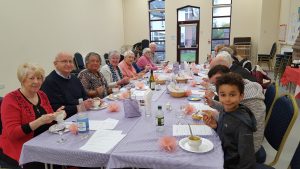 On Sunday afternoon we were treated to a performance by the Choir  of musical items ranging from songs from the shows to spirituals. The show was held together by a virtuoso performance as conductor and teller of hilarious corny jokes by Keith. A thoroughly enjoyable afternoon. £253 was raised for church funds.

This is a new venture for St Hilda’s.  It will be a quiet reflective evening based on Peregrini Prayer.  It is intended that this will take place once a month.